The stars have truly aligned.

Only, now there’s a web of acronyms and jargons to untangle.

The two best screen technologies are OLED and QLED. They look and sound similar but couldn’t actually be more different.

To help you make the right decision, here’s a simple-to-understand comparison of the two.

So What is OLED TV?

OLED (organic light-emitting diode) is a piece of display tech where every pixel on the screen can emit its own light when charged with electricity.

Each pixel can be independently turned on or off.

The major manufacturer of OLED is LG with other brands like SONY and Panasonic on board. 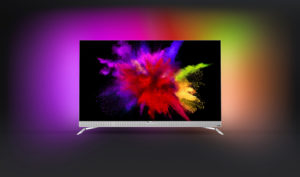 What about QLED TV?

QLED (Quantum-dot light-emitting diode) uses a layer of quantum dots to produce a wide range of colours when hit by light from behind.

This means that unlike OLED, QLED TV’s require a backlight. 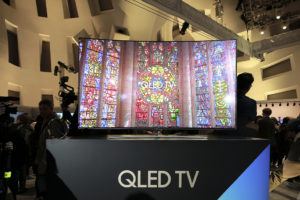 Quantum dots are capable of delivering a much richer gamut of colours than OLED but these capabilities can’t be maximised until quantum dots can emit their own light without the need for any backlighting.

QLED is manufactured by Samsung with Hisense and TCL also on board.

Which One Should You Choose?

That will depend on your individual needs. There is no definitive answer and both have their pros and cons.

To help you with your decision, let’s compare the two based on type of media and key performance factors.

OLED or QLED for Movies

If you’re looking for the best cinematic viewing experience at home, then it’s all about the black levels. QLED’s backlighting system means that blacks will suffer from ‘light bleed’ and appear more grey. 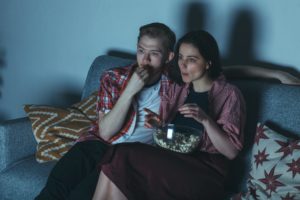 OLED or QLED for Gaming

For gaming, you’ll want to consider other factors ahead of image quality.

First and foremost – input lag. This is the delay between the output from your console and seeing it on the screen. When you’re dealing with games where fractions of a second make all the difference, you’ll want a screen with the lowest input lag. While input lag varies from model to model, QLED screens generally have the lowest input lag.

Another factor is burn-in. OLED can suffer from image retention of elements that are on the screen for too long like logos and scoreboards. QLED has zero risk of burn-in.

QLED also delivers higher brightness due to its backlight system. In light-filled rooms, QLED is the obvious choice. 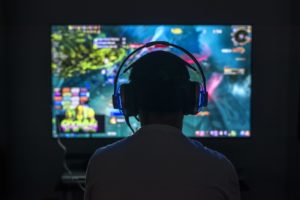 OLED or QLED for Sports

Unless you’ve been falconed or caught with a left hook, you shouldn’t be experiencing any motion blur in sports.

The deciding factor here is your TV refresh rate. This refers to the number of times a second that your screen refreshes itself. The more times the screen is refreshed, the smoother the picture.

OLED pips QLED in this category with faster refresh rates.

QLED screens are best viewed dead centre. Move side to side or up and down and you’ll begin to notice a loss in colour and contrast.

OLED, on the other hand, allows for a much wider viewing angle without compromising picture quality.

So is OLED the Best Then?

OLED takes a slight lead in terms of black levels, viewing angles, refresh rates and power consumption. QLED on the other hand is brighter, can produce more vivid colours, doesn’t suffer from image burn and perhaps most compellingly, is the cheaper of the two screens.

At this stage, OLED may have a slight edge over QLED, but the margins are very slim.

At the end of the day, it will come down to your viewing behaviour and budget.

What About My Beloved Plasma?!

We get it. Back in the day, you bought the best TV on the block which happened to be a plasma. It had the deepest blacks and the richest colours. In your eyes, it still looks really, really good.

So here’s a bonus round: Plasma vs OLED.

Looks like it’s going to be a pretty short round. Everything from black levels, colours and overall picture quality is simply on another level with OLED.

Your Panasonic or Pioneer Kuro may have outlasted every contender over the years, but it’s time to bid a fond farewell to it, at least as the main TV.

Click here to browse our range of OLED and QLED TV’s.